As I promised, here is some university photos. This is one of the workspaces in the Design Factory of Aalto. Not sure what the equipment is for but I will soon learn. 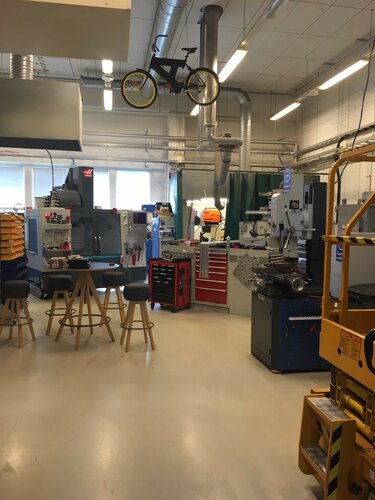 Students in Finland get a student card. It can be physical plastic card or an application in a smartphone. With such ID, a student can get different discounts. It makes their life much easier :-) 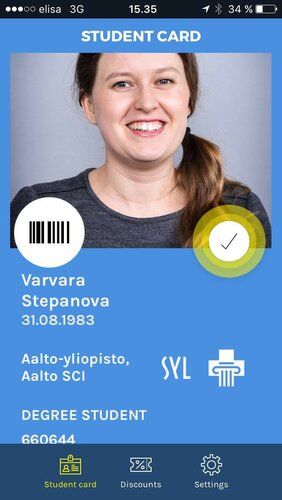 Timehop brought me some memories. Yes, we have busses with USB sockets and passengers can charge their devices. It was quite handy when catching Pokémons!

Helsinki has an ambitious program to make owning a car useless in 10 years. Every single detail serves this purpose. This month, the route from my area to the city center got new busses with USB sockets. And I guess there are many other things to discover :-)

In Helsinki, Vantaa and Espoo, every bus stop has its number. You can see it written on the table, and also you will see it in route planning application. It is very useful, especially in some new places. Sometimes happens that a couple of bus stops are placed one by one. Without a number, it would be hard to understand where to expect a bus. Or on narrow streets if the bus stops are in front of each other, it is easy to ride to a wrong direction. I got used to check the number.

There are also dark sides of Finland... For example, opening the western part of metro is again postponed. It has already started to seem as a joke. Not yet so funny as about Berlin airport but anyway the Finns have all the chances.

The first thing to say, Helsinki has ony one metro line and its development means to prolong this line. There are no even talks about making other crossing lines, at least in the near future. At the moment, they are building the line from Helsinki city center to the west. Its length is 21 kilometer ans it is supposed to have 13 stations.

The plan was to open the first half of the line, and later the second. Initially, this first part should be opened in autumn 2014 but in the middle of development, it became clear that the release had to be postponed. At some point, they decided to announce the opening for August 2016. It was shouted everythere, the city changed the bus schedule and put into about that at every bus stop. Then suddenly in June, there is information that they cannot make it and postpone to the New Year. Then, to April 2017 and last time to September 2017.

And now, again we got to know that nothing is ready and the new deadline is beginning of 2018.

For me, the biggest surprise is that no one is sentensed. Even the media scandal is not that big.

Helsinki maternity hospital gets too much patients. Do you guess what is their plan? No, no-one's bed is placed in corridors. Instead, they booked entire floor of the nearest hotel for the mothers and newborns to have rest. Sure, they do not get there right after delivery but in the last period of staying in hospital, 1-2 days before leaving.
The details are in this article in English.

The Finnish language is believed difficult to study. But Finnish introvert culture kind of compensate this. There is a lot of hosted material like podcasts, vlogs, movies and TV programs available in Finnish. Everything that people consume as media at their homes hiding from all the others can be used as a study material. For the beginning, it is nice to go with children's content. For example, this is a podcast version of children radio program with about 10-minute pieces of fairy tales, stories or interesting facts about different aspects of like. Enjoy!

Yesterday, we learned from practice that traditional housewarming gift in Finland is bread and salt. Salt you always need, and bread is for making leaven out of it and producing new bread. Wikipedia confirms.
Wikipedia in Finnish confirms this as well.

In Finland, if a person changes a company where he/she buys car insurance, they don't need to cancel a contract with the old company. The new company does this cancellation automatically when it gets a new customer. Little detail, but so much about way-of-life in here.

Espoo City council has approved an ambitious plan to make English the third official language of the region.

In a late night vote, local councilors decided by a margin of 70-4 to greenlight a sweeping future plan for the region, which includes provisions to give English official language status.

The council hopes the move will help attract more international business to the region, giving it a competitive edge for companies who want to bring in specialist foreign workers.

In practical terms, making English one of Espoo’s official languages will mean that services like local health care, local government websites and forms will all need to be available in English.

For a long time, here in Finland, there are conversations about a tunnel between Helsinki and Tallinn (Estonia).

It seemed utopia just recently. There is little traffic, ferry companies will not be happy. And the metro line which cannot be opened yet is still the biggest construction project in Finland. Given this, a tunnel under the sea seems too much. 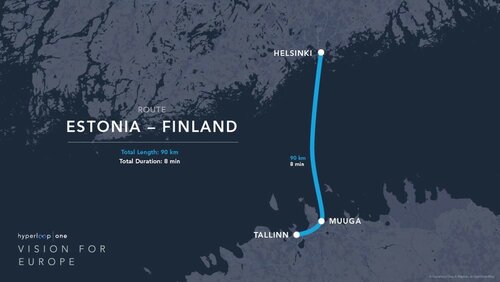 However, despite many other ideas when talks disappear after a while, information about the tunnel appears again and again. When it turned out that Hyperloop Helsinki-Stockholm (yeah, we had such a project as well) most likely will not succeed, all the attention was given to Helsinki-Tallinn again. "What if we build not auto and railway tunnel but a Hyperloop?" I must say that this idea sounds valid. Unlike other Hyperloop locations, Helsinki-Tallinn direction has only ferries and very expensive (if to calculate per kilometer) flights.

And today's news is that Espoo city has decided to step in and push the tunnel going through it. There are more and more talks about the project, even EU says that it can finance something. And now we will have city-city competition, which is always good.