At the weekend, we walk around our area and found this monument /in the bushes/. During the war, when it was going to the end, some territory to the west of Espoo was "rented" by Soviet Union ant they set up there a naval base.

If interested, you can find some details in Wikipedia in English.
And in Finnish.

The monument's shape reminds the borders of the area and signed in Finnish, Swedish and Russian. There is some text describing the history of the place in Finnish and Swedish. Here is what it says:

About 1000 square meters was rented for 50 years. In 9 (!) days Finnish people moved out of the territory 7200 people, 8000 animals, all the potatoes (awwww, it says about potatoes!) and a part of harvested hay.

The Soviet Union placed there 30000 people and built a border. After 12 years the territory was decided to be out of usage and returned back to Finland. On the day of signing the papers, Finland gave the access to the territory at 15.00. 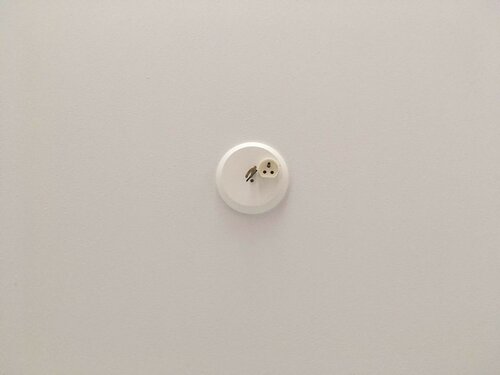 This is a ceiling with a hook and a little socket. It is kind of standard in Finland for hanging a lamp. Even IKEA adjusted and sells lamps with matching plugs, unlike naked cords in other countries.

Such brushes are installed near every enterance (either offices or living building). When coming inside you can clean your shoes. Finnish forethought is amazing!

Old clothes can be thrown away into containers. They are not in every district but in many places. It's important to pack into plastic bag. UFF is popular shop but Fida gives their profit for charity.

At the special website, you can find the notes of state doctors regarding your health. Singing in goes with the bank credentials. In other words, if you have a bank account, you can log in. After authorization, you can see a list of meetings with doctors and diagnosis as well as notes from hospitals.

I'm still trying to order new glasses, but the last vision test in the optic shop was made by a student optician, the results are questionable and I do not trust them. I would be better to compare the gotten numbers with a result of a qualified doctor. Initially, I wanted to visit such a doctor but later recollected that recently I visited a large eye clinic due to some other questions. I remember that they made some measures also but I did not get any paper. So, I logged in kanta.fi and found full information there. There are my words written, the results of all the tests, and the doctor's conclusion.

Also, in the system, there is everything about upcoming interactions with the health system. For example, when and where is the next appointment. They send invitations by regular post, and if you have lost it or forget, you can refresh your memory at the website. Also, it shows the hospital department with which you are dealing with, in the case of some questions you can call there.